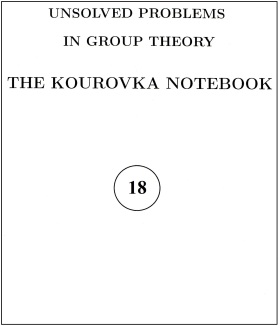 a start for preparation of the new 19th edition of the “Kourovka Notebook” — the famous collection of unsolved problems in Group Theory and related areas. This publication originated in Novosibirsk in 1965, since then gained world-wide popularity and now includes more than 1000 problems by about 400 authors from all over the world. Nowadays it is published on the web but still retains discrete issues appearing every 3–4 years, with more frequent updates online.

For more than 50 years the “Kourovka Notebook” has served as a unique means of communication for researchers in Group Theory and nearby fields of mathematics. Maybe the most striking illustration of its success is the fact that more than 3/4 of the problems from the first issue have now been solved! (Of course, it is often easier to propose a new problem than to solved an old one…)

Everybody is welcome to propose new problems to be included in the new edition. Problems may “belong” to those who propose them, or otherwise. In the latter case, one can indicate the author(s) of the problem (if different from the person proposing), or simply that this is a “well-known problem”. In order that the progress would be “measured” and seen, the preference is usually given to concrete questions that admit “yes” or “no” answers.

The Editors also welcome any other comments on, or/and solutions of, existing problems; the current version on Arxiv incorporates all comments so far.

The problems and comments can be sent to any of the Editors (preferably by e-mail):

One comment on “Call for new Kourovka problems in Group Theory”

This entry was posted on June 11, 2017 by Evgeny Khukhro in New publications, News and announcements.