On Wednesday the 27th of March 2019, Joanna Fawcett (Imperial College London) will be visiting the Charlotte Scott Centre for Algebra and giving a seminar. Her talk will be at 3pm in INB 3305. The details are as follows:

Abstract: Let $X$ be a class of graphs. A graph $\Gamma$ is $X$-homogeneous if every graph isomorphism $\varphi:\Delta_1\to \Delta_2$ between induced subgraphs $\Delta_1$ and $\Delta_2$ of $\Gamma$ such that $\Delta_1\in X$ extends to an automorphism of $\Gamma$. For example, if $X=\{K_1\}$, then $X$-homogeneity is vertex-transitivity, and if $X=\{K_2\}$, then $X$-homogeneity is arc-transitivity. A graph is \textit{tree-homogeneous} if it is $X$-homogeneous where $X$ is the class of trees. We will discuss some recent progress on classifying the finite tree-homogeneous graphs, as well as some connections with certain highly symmetric incidence geometries called partial linear spaces. 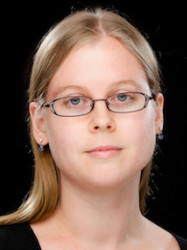 This entry was posted on March 14, 2019 by Anitha Thillaisundaram in research, Seminar, Visitors.