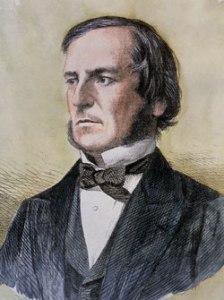 Evgeny Khukhro will give a public lecture George Boole — Legacy of a Mathematics Revolutionary on  2 November 2015 at 6:30pm in the EMMTEC building, University of Lincoln (map).

George Boole was one of the most influential mathematical minds of the 19th Century. His work laid the foundations of mathematical logic, and Boolean operations later became instrumental in the development of computer science and technology that we now use.

Several events in 2015 celebrate Boole’s bicentennial anniversary, among which there is an exhibition in Lincoln University, which will soon move to Lincoln cathedral, where another lecture on the life of Boole will take place on 29 October. The lecture by Evgeny Khukhro on 2 November in University of Lincoln will be focusing on the mathematical legacy of Boole’s work.

If you would like to book your place on this talk, please use the online booking button “Book a place” on the page

This entry was posted on September 7, 2015 by Evgeny Khukhro in News and announcements, Talks and visits.